Cocaine worth over £400k found in Fife drugs raid 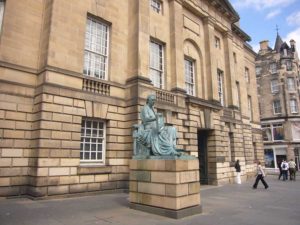 A Fife man was found with cocaine his home which could have been worth up to £440,000 on the streets.

Calum Morrison is behind bars after he was caught with high purity cocaine that could have produced 11 kilos of the drug.

Morrison admitted to police after he was detained that he was bulking up cocaine for onward supply.

The High Court in Edinburgh heard that officers armed with a search warrant turned up at his home in Union Street, Cowdenbeath, after intelligence was received that large amounts of drugs were being stored in the flat.

Police found unemployed Morrison (38), alone in the flat with bags of cocaine and packages of the cutting agent, benzocaine.

A total of 1.1 kilos of cocaine was found along with 1.3 kilos of the adulterant commonly used to bulk out the drug.

Advocate depute Lisa Gillespie told the court that some of the cocaine’s purity was as low as three per cent but almost half a kilo of the drug was 70 per cent pure.

The prosecutor said that if the latter amount was adulterated to three per cent and sold in street deals, it was worth between £220,000 and £440,000 and could have produced in excess of 11 kilos for sale.

“When he was interviewed, he admitted that the items recovered in the house were his and that he had been adulterating cocaine for onward supply,” she said.

Morrison admitted being concerned in the supply of the Class A drug on November 3 and 10 last year, when he appeared in court.

Defence solicitor advocate Gordon Martin said: “He accepts that given the quantity of drugs recovered and their potential value, the court will have little option other than a custodial sentence.”

Judge Robert Weir QC continued the case for a background report ahead of sentencing and Morrison was remanded in custody.