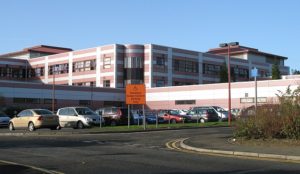 A charity box for the Guide Dogs for the Blind has been stolen from the Queen Margaret Hospital, Dunfermline.

The charity box was in the shape of a golden Labrador guide dog with a smaller dog beside it. It is not known how much money was inside.

A suspect described as having grey hair and wearing a light blue tracksuit top was seen by members of the public near to the cycle path at Whitefield road.

Officers are now appealing for anyone with information to please get in contact.

Constable Vicki Philip of Safer Towns Dunfermline said, “This is a large distinctive object and we feel sure that someone must know who is responsible for the theft.”