Shoplifting “crisis” – does anyone actually pay at Debenhams, wonders sheriff 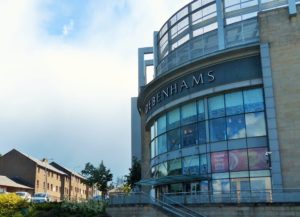 A sheriff has described the level of shoplifting at a Fife shopping centre as a “crisis”.

Sheriff James MacDonald said it was little wonder Debenhams was facing financial difficulties given the amount of thieving that goes on at its Dunfermline store.

He said he was beginning to wonder if anybody actually pays for goods at that shop.

Thieves appear at Dunfermline Sheriff Court on a daily basis having been caught stealing from Debenhams and other stores in the Kingsgate Centre.

The latest culprit in the dock was James Henderson (41), of Gilfillan Road, Dunfermline.

He admitted that on 8th February at Debenhams, Kingsgate Centre, he stole a bottle of perfume.

Henderson should have been sentenced on 1st May but after speaking to his solicitor left court before his case was called.

He appeared from custody after a warrant was granted.

Solicitor Danielle Varela admitted, “He has an unenviable record and is no stranger to the court. He has a long-standing problem with drugs and has spent much of his adult life in jail.”

Depute fiscal Azrah Yousaf said the value of the stolen goods was £82.20.

Sheriff James MacDonald commented, “It is little wonder that Debenhams is in financial difficulties. I’m beginning to wonder if anyone buys anything from its Dunfermline store.

“This is yet another theft from the Kingsgate Centre. It seems to me that the level of thefts there is becoming a crisis.”

The sheriff imposed a community payback order on Henderson with 18 months’ supervision and he must engage in treatment for his mental health and substance abuse problems.

The sheriff warned Henderson to comply with the order saying, “Be under no illusion this is a direct alternative to custody.”

Earlier this week, a Dunfermline woman was jailed for four months for stealing ice cream from Poundland in the Kingsgate.