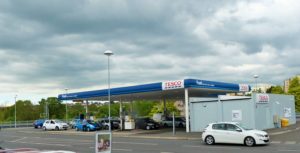 A bungling crook was caught fixing “skimming” devices on to card payment pumps at a busy Dunfermline petrol station.

The incident took place at tea-time on a Saturday and the alarm was raised by another driver who became suspicious at the behaviour of Stefan Rupa, a Romanian national.

It is believed he is part of a “large scale” crime gang operation putting skimming appliances on card machines around the country,

After fitting the devices, designed to obtain bank card details and PIN numbers, Rupa left the scene but later returned as he had dropped his wallet during the offence.

The wallet had already been found containing Rupa’s ID cards. When he went back to the petrol station to ask about his lost property his car registration was passed on to the police.

The 42-year-old, of no fixed abode, appeared from custody at Dunfermline Sheriff Court accompanied by an interpreter.

He admitted that on 18th March at the Tesco petrol station, Winterthur Lane, he placed electronic devices, designed to extract bank and credit card numbers and the associated PIN numbers, over payment units at self-pay pumps and attempted to steal banking details.

Two men were seen acting suspiciously next to a petrol pump and their behaviour resulted in a customer phoning the police.

When police arrived to investigate, the two males, described as being of “Eastern European” appearance, had left but a wallet had been found lying on the ground.

This belonged to Rupa and contained ID cards in his name.

Police found two skimming devices which had been attached to card-only payment pumps.

The depute continued, “Subsequently the accused returned to the petrol station to ask about his lost wallet and he was then traced by officers through the registration number of the vehicle.”

He was detained and investigations uncovered a recent £1000 payment to him from someone in Romania.

“It is thought that the accused was involved in a large scale organised crime group travelling from locus to locus and carrying out similar offences,” said Mr Kapadia.

“It’s not thought that this offence was successful in obtaining any information.”

The incident was captured on CCTV and video showed the two men hanging about at pumps before trying to attached the skimming devices.

Rupa later claimed that he was living in Fife and gave an East Wemyss address. However, when this was checked by police the householder said they did not know any Stefan Rupa.

Defence solicitor Barbara Collie said her client still insisted he had been living at this address.

In these circumstances, Sheriff Alison McKay deferred sentencing until 1st June for further inquiries to be made about the address given by Rupa. He will remain in custody until then.