Woman battered with her crutches in brawl outside pub 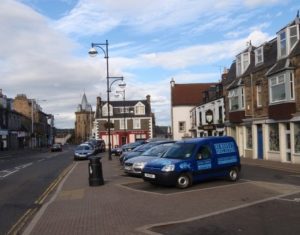 A man and two women involved in a mass street brawl outside a pub have avoided jail sentences.

The fight broke out in Inverkeithing High Street and continued for over five minutes until the police arrived.

People were seen being kicked, punched and hit with crutches in an incident captured on CCTV and shown at Dunfermline Sheriff Court.

Sheriff Craig McSherry described some of the scenes he viewed as “incredible”.

One man retaliated furiously after being whacked over the head by a woman’s crutch.

He took the crutch from her and repeatedly battered her with it.

The incident began at around midnight when a woman on crutches lunged at someone at a pub doorway.

This provoked a melee in which around eight people were pulling and punching at each other on the ground.

After it was broken up, the woman with the crutches used one of them to hit a man over the head.

He took the crutch from her and battered her with it as well as repeatedly kicking her on the head, with his sister joining in and doing the same. At one stage in the video three women are seen lying on the ground, looking dazed.

Back in court for sentencing were Lindsey Peacock (33), her brother Michael Peacock (30), both of Fraser Avenue, Inverkeithing and Rebecca Bedborough (26), of Fairykirk Road, Rosyth.

He also admitted assaulting Rebecca Stenhouse by kicking her on the body.

Lindsey Peacock admitted assaulting Corrie Johnston by repeatedly kicking her on the head to her injury.

Depute fiscal Ron Hay previously said it was clear from the CCTV that Corrie Johnston had been the “instigator”.

However, she had been assaulted as a result and required hospital treatment for a swollen cheekbone, bruised eyes, a cut nose, a split lip and cuts and bruises to her back.

After seeing the CCTV twice, Sheriff Craig McSherry previously warned the trio, custody was “at the forefront of my mind.”

However, when they returned for sentencing he said it was clear there had been “considerable provocation”.

“It was incredible to see this woman on two crutches repeatedly becoming involved in assaults,” he added.

Michael Peacock was placed on a community payback order with 300 hours of unpaid work and a restriction of liberty order for six months.

Lindsey Peacock was placed on a community payback order with 240 hours of unpaid work and a four-month restriction of liberty order.