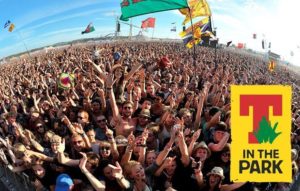 A Fife man caught trying to take ecstasy into T in the Park has been put on a ‘tag’ for eight months.

He had admitted that on 8th July last year at T in the Park at the Strathallan Estate, Auchterarder, he was in possession of ecstasy with intent to supply.

He was back in the dock at Dunfermline Sheriff Court when he failed to complete the unpaid work.

Defence solicitor Roshni Joshi said, “He was stopped by security officers at the gate of T in the Park.

“The drugs were lying at the top of his rucksack. He did not try to hide them.”

She said her client had “drawn the short straw” and was taking the drugs in to be used by his friends.

The court heard Marshall was now not fit to carry out the unpaid work.

Sheriff Charles MacNair was not impressed, saying, “It’s often the case that before sentence the accused says he’s fit for unpaid work then when it’s imposed he says he can’t do it.”

The sheriff revoked the original order and imposed a new one with an eight-month restriction of liberty order.