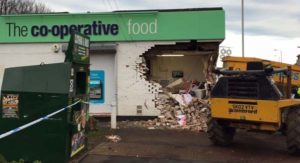 A 44-year-old man has been charged following a ram-raid incident in Kirkcaldy.

In the early hours of Monday 12th December, a dumper truck was used to cause significant structural damage to the Co-op store in Lauder Road by repeatedly striking the building. It had been stolen from Hayfield Industrial Estate.

Kirkcaldy CID have been conducting inquiries since the incident and as a result of information from the community, a man has now been charged.

He is scheduled to appear at Kirkcaldy Sheriff Court at a later date.