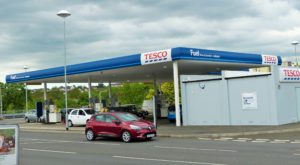 A Romanian crook, caught fixing card-skimming devices to pumps at a Dunfermline petrol station, has been jailed.

The incident took place at tea-time on a Saturday with the alarm raised by another driver who became suspicious at the behaviour of Stefan Rupa.

Rupa (42) was quickly identified as the culprit after dropping his wallet at the scene, containing his ID cards.

He later gave a false address in East Wemyss, claiming he was living there.

It is believed he was part of a crime gang operation putting skimming appliances on card machines around the country.

If successful, the fraud would have seen unsuspecting fuel customers having their banks accounts emptied.

The devices are designed to obtain bank card details and PIN numbers but failed this time as they were quickly found by police alerted by a motorist.

Rupa appeared from custody at Dunfermline Sheriff Court for sentencing, accompanied by an interpreter.

He previously admitted that on 18th March at the Tesco petrol station, Winterthur Lane, he placed electronic devices, designed to extract bank and credit card numbers and the associated PIN numbers, over payment units at self-pay pumps and attempted to steal banking details.

Two men were seen acting suspiciously next to a petrol pump and their behaviour resulted in a customer phoning the police.

“The witness contacted the police who immediately contacted Tesco to make them aware of what had happened,” added the depute.

A staff member went out to check the petrol forecourt and found the wallet lying on the ground.

Police found two skimming devices which had been attached to card-only payment pumps.

CCTV was checked to find the registration number of Rupa’s car and he was traced and stopped by a police patrol car.

He was detained and investigations uncovered a recent £1000 payment to him from someone in Romania.

“It is thought that the accused was involved in a large scale organised crime group travelling from locus to locus and carrying out similar offences,” Mr Kapadia had told the court at a previous hearing.

Rupa claimed that he was living in Fife and gave an East Wemyss address. However, when this was checked by police it turned out to be false.

Defence solicitor Selina Mackay said, “He was raised in Romania and came to the UK to find a better life. He was originally in London and had been in Scotland for a month before this offence.

“He was not receiving any benefits and was struggling financially.”

Ms Mackay said her client had been offered £100 for putting devices on petrol pumps. “He says it was the first time he’d ever done this,” she added.

Sheriff Charles MacNair said, “This was an attempt to commit credit card fraud by the use of a skimming device.

“You say you were to receive £100. The problem I have with that is wherever the information provided by you can be verified it seems to be false.

“In any event this was a very serious offence.” He jailed Rupa for six months backdated to 24th April when he was taken into custody.

Rupa then began to speak to the sheriff in English, attempting to explain where the £1000 had come from but was led away to the cells.