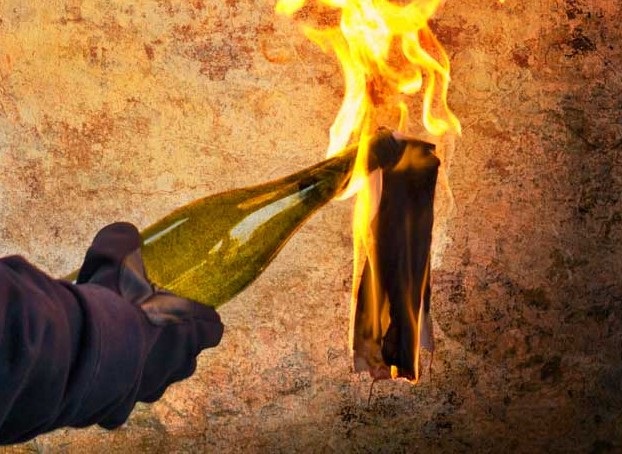 A racist firebombed an Asian-owned take-away shop in Rosyth and then bragged about it online.

Charles Johnston wore a mask and waved a machete as he ranted about Muslims and claimed he had burned down a kebab shop.

However, his identity was revealed after he blurted out his home address in Rosyth when he was called a “pussy”.

Johnston was also wearing the same hoodie he had on when he tried to torch the take-away, an incident captured on CCTV.

He believed that money being taken for kebabs was going towards terrorism.

Johnston, 20, of Tovey Road, Rosyth, had admitted the offences in March but failed to turn up for sentencing in April after being told he faced jail.

He then evaded justice until his arrest in October and has now finally been sentenced at Dunfermline Sheriff Court.

Johnston admitted that on 18th May last year at Shalimar Kebab, Queensferry Road, he wilfully set fire to the premises by setting light to a bottle containing a quantity of petrol and throwing it at the premises.

The fire took effect damaging the shutters and the offence was aggravated by religious prejudice.

He also admitted that on 2nd June last year, at his home, he uploaded a live video to an on-line broadcasting service, Periscope, in which he repeatedly uttered racist, offensive and abusive remarks, all whilst holding a machete with his face masked.

He further admitted that on the same day, at Sherbrooke Road, he was in possession of a lock-knife.

Depute fiscal Alex Kirk previously told the court that Johnston had gone on his bike to the take-away after midnight when it was closed and shuttered, as shown on CCTV video.

He had his hoodie pulled on, was carrying a bottle full of petrol and had just bought a lighter from a local garage.

“The accused then stops his bike directly outside of the locus, gets off the bike and walks with the bike out of sight. He is still holding the bottle,” added the depute.

“At 0017hrs the accused approaches the locus on foot. He is holding a mobile phone in one hand and the bottle in the other.

“As he is standing outside, a flash and glow becomes visible before the accused throws an object directly at the locus.

“The metal shutters are already down, the object results in a fireball and burns for a period of time. The accused is observed holding out his mobile phone as though recording this. He then runs away retrieving his bike and cycling away.”

A taxi driver saw the fire and someone on a bike filming it on their phone.

Around a fortnight later, Johnston was bragging on the internet.

He told someone on the site to “go rape some children you dirty brown Muslim c****. I’m gonna take ISIS in my stride.

“I set a kebab shop on fire because halal food contributes a 2% tax. Every kebab bought contributes to terrorist organisations.”

Defence solicitor Elaine Buist said in March, “He says he doesn’t have anything against individual Muslims.”

Sheriff Charles MacNair responded then, “That is what is said by just about every racist. He clearly is a racist.”

However, when he was brought back to court for sentencing, Ms Buist said, “He now admits that at the time he was holding extreme views.”

Sheriff Alastair Brown described the views expressed by Johnston about Muslims as “odious”. He jailed him for four years.