Footballer in court over flying kick to the face 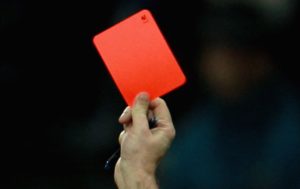 An off-the-ball tackle during an amateur football match in Fife has ended up with a player being convicted of assault.

Owen Reid  targeted an opponent with a flying kick in the face during a “heated” cup match in Aberdour.

Reid  (28) was playing for Westquarter Violets against Bayside when he ran 20 yards across the pitch and flew at his victim leaving with facially scarred.

Reid, of Kirkwood Avenue, Falkirk, appeared in the dock at Dunfermline Sheriff Court.

He previously admitted that on 30th September last year, at Hawkcraig Road, he assaulted Greg Brechin when he ran towards him, jumped into the air, causing his feet to strike him on the head, causing him to fall to the ground to his injury and disfigurement.

Depute fiscal Rebecca Clark told the court that the Bayside player was involved in a challenge which resulted in a foul.

As Mr Brechin got to his feet, Reid ran 20 yards towards him and took a “run and jump with both feet off the ground” and kicked his victim in the face with both feet, knocking him to the ground.

The injury required three internal stitches and six external ones and left a 15mm scar.

Solicitor Rosni Joshhi said, “This appears to be an incident born out of a very heated match where Mr Reid had taken the view that something had happened between the complainer and his team-mate but clearly his actions were utterly disproportionate.

“He has received punishment from the football association regarding his conduct. He accepts that this is by no means the only punishment he will receive. He is in a position where he cannot play for that team for a period of two years.”

Sheriff Linda Smith imposed a community payback order with supervision for a year and 125 hours of unpaid work. She also ordered Reid to pay £1,000 compensation.