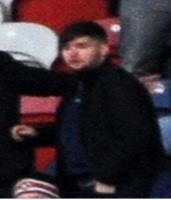 Police investigating an incident in which a Raith Rovers player was struck by a coin during a match have issued an image of a person they want to trace.

The incident happened during the Raith-Dundee United game at Starks Park on 18th March.

Rovers midfielder Ross Matthews was seen clutching the side of his head after being struck with the coin but thankfully he avoided serious injury.

Inquiries have been continuing since to trace the thug responsible and the man pictured is “of interest to the investigation”.

He is  white, in his early to mid-twenties, of heavy build, with dark hair styled to the side, dark stubble and was wearing all dark clothing.

Anyone who recognises this man, or who witnesses the incident, is asked to contact the police.

Constable Jez Graves, from the Kirkcaldy Community Investigation Unit, said, “Reckless behaviour like this could have resulted in serious injury and such behaviour cannot be tolerated.

“Anyone who recognises the man pictured in the CCTV image, or who has any other information relevant to our ongoing inquiries, is asked to get in touch immediately.”

After the incident the Kirkcaldy club said the 21-year-old player sustained a minor injury but claimed the encounter could easily have had “disastrous consequences”.

Chief executive Eric Drysdale said, “As luck would have it it didn’t make contact with the eye.

“It’s a relatively minor injury but an inch to one side and it could have had absolutely disastrous consequences.”