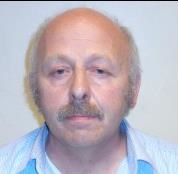 A Fife businessman has been jailed for five years at Dundee Sheriff Court for a sickening catalogue of child sex abuse against three boys, aged between three and 11 at the time.

David Glass (59), from Anstruther, befriended a family at a vulnerable time and used his position to groom the children and subject them to abuse.

Glass (pictured above) had blamed his victims, saying he was being targeted by the boys for money.

However, he was convicted of similar sex offences in 2014.

A sheriff told him he was a “danger to children” and the offences “had catastrophic consequences for your victims.”

A trial at Dundee Sheriff Court heard how Glass befriended the parents of his victims when they were going through personal difficulties.

He won their trust and confidence which allowed him to spend time alone with their children.

Then, over the course of almost two years in the late 1980s, he subjected two of his victims to repeated sex abuse at his caravan in the East Neuk.

The abuse only stopped when one of the boys died in the spring of 1989.

Then in the mid-90s Glass targeted another boy, aged between nine and 11 at the time, forcing the boy to bathe with him and carrying out sex acts on him and abusing him while he slept.

Glass was found guilty of five charges of abuse between August 1987 and August 1996.

Sheriff Tom Hughes jailed Glass for five years and made him subject to one year’s extended licence upon his release.

Glass was also placed on the sex offenders register for life.

The sheriff said, “You groomed them, purchased them gifts and won their confidence and carefully manipulated them into a situation where you could carry out this criminal conduct.

“Conduct no child should ever have to endure.

“You take no responsibility whatsoever and you blame others for the position you find yourself in. Based on the evidence before me there is no merit in your denials.”

The sheriff went on, “In my view you are a danger to children. You must be told in clear terms that your offending has had a catastrophic effect on your victims in this case. You are responsible for all of that.

“They gave evidence and they were believed – you were not.”

In September 2014, Glass was convicted at Dunfermline Sheriff Court of a string of offences committed in the same area over an eight-year period from 2004 to 2012.

He was released from that sentence in early 2016.

“Glass is a deviant who preyed on young children and he has been brought to justice thanks to the bravery and strength of the victims.

“We understand that people who have experienced abuse as children often find it difficult to speak out as adults for a number of reasons.

“Please be assured that we take all reports of sexual abuse very seriously, regardless of how much time has passed, and have detectives who are committed to thoroughly investigating these despicable offences.”