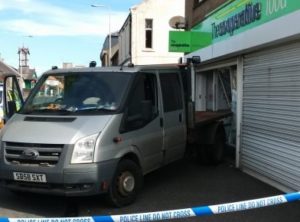 A 25-year-old man has been charged in connection with a ram-raid at the Co-op store in Thornton.

The incident took place in Main Street at around 2.15am on Wednesday 17th May.

A Ford Transit flatbed van, stolen in Station Road, was reversed into the premises.

Extensive damage was caused and an attempt made to steal the ATM.

Detective Inspector Stewart Andrew, of Glenrothes CID, said, “Officers have been pursuing various lines of enquiry ever since this incident took place, which has included liaison with our colleagues in Durham Constabulary.

“I want to thank local residents for their support throughout and reassure the community that we will use all resources at our disposal to investigate such incidents.”

The man is expected to appear at Kirkcaldy Sheriff Court on Monday.