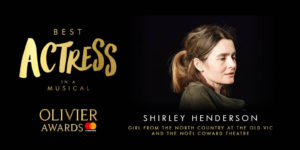 Shirley won the ‘Best Actress in a Musical’ prize for her performance in ‘Girl From the North Country’.

She spoke about coming across her diary from when she was just 17 and about to start drama school.

She went on, “I wrote that my dream was to sing on the London stage,” she said. “It took 33 years – but it’s been worth the wait.”

Shirley (52) grew up in Kincardine and was educated in Dunfermline.

She studied theatre arts at Fife College, Kirkcaldy, before going on to the Guildhall School of Music and Drama in London.

She has starred in many high profile movies including ‘Trainspotting’, she was Moaning Myrtle in the Harry Potter films and played Jude in the Bridget Jones series.