Driver attacked and stabbed in his car in Dunfermline 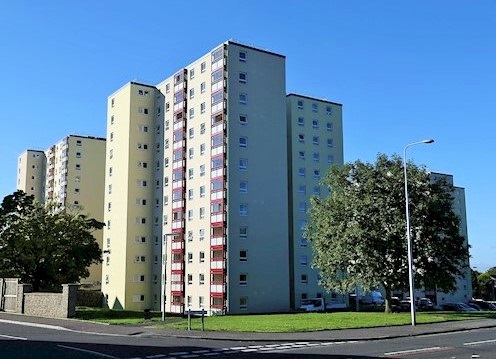 A driver was attacked in his car by two men in Dunfermline and stabbed in the leg, a trial has heard.

With blood pouring from his wounds, the injured man tried to drive himself to hospital but almost passed out at the wheel.

The incident was captured on CCTV operated from the Broomhead flats.

Liam Kinch was filmed attacking the driver then walking back to the block where he lived and video then showed him standing waiting for the lift.

After the trial at Dunfermline Sheriff Court, Kinch, 24, of Broomhead Drive, was found guilty.

He was convicted of a charge that on 25th February last year at Broomhead Drive, whilst acting with another, he assaulted David Bunting by repeatedly punching him on the head and repeatedly struck him on the leg with a knife or similar implement, all to his severe injury.

The incident happened in the early hours of the morning. CCTV video showed two men running towards the car after it had stopped on the main road outside the flats.

The pair then walked back into the building, with one of them holding a knife.

Mr Bunting told the court he and a friend had come through from the Glasgow area where they live to visit some people in Fife.

He said the attack happened when he was sitting in his car eating take-away food he had bought.

“Words were said and then everything kicked off,” said Mr Bunting. “One of the boys tried to open the driver’s door but I managed to pull it shut.

“They got the door open again. I remember getting stabbed in my leg and punched in the face. I was stabbed and slashed.”

He sustained two wounds which both required stitches at hospital.

Asked by depute fiscal Alex Kirk about what happened after the attack, the witness said, “I might have drove a wee bit then I was passing out.”

His friend took over at the wheel and they went to the Queen Margaret Hospital before Mr Bunting was transferred to the Victoria in Kirkcaldy.

Cross-examined by defence solicitor Ian Beatson, Mr Bunting denied that the purpose of his visit to Fife that night was the illegal sale of alcohol.

“Mr Kinch’s position is that he was going to buy alcohol from you,” said Mr Beatson.

“No,” replied the witness.

Asked about the weapon used in the incident, Mr Bunting said, “It was a big knife.”

Sheriff Charles MacNair called for reports and Kinch will remain in custody until sentencing on 12th June.