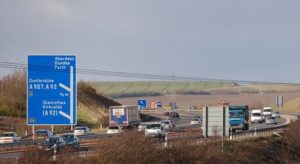 A drink-driver was trapped in his car after he hit the central reservation and overturned on the M90 in Fife.

The incident happened as Paul Oliver travelled north between Halbeath and Kelty when he was almost double the drink-drive limit.

He admitted that on 8th October last year on the M90 northbound carriageway he drove after consuming excess alcohol.

His reading was 96 milligrammes of alcohol in 100 millilitres of blood, the legal limit being 50 milligrammes.

Depute fiscal Dev Kapadia told the court Oliver was driving a Peugeot 206 and a witness described the vehicle as being “out of control”.

“The car hit the central reservation and came to rest on the hard shoulder,” he added.

Oliver had to be freed from his vehicle.

Oliver, who represented himself in court, said he had been off work for a month with his injuries.

Sheriff Craig McSherry fined Oliver £1000 and banned him from driving for a year.