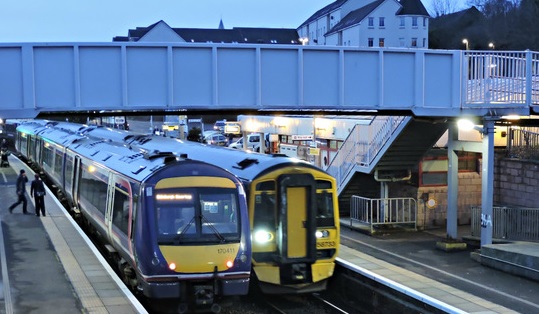 A 14-year-old was targeted by a convicted paedophile who travelled 500 miles by train to meet her in Fife.

Depraved Michael Murray (34) was seen by a concerned member of the public at a station making a video call to the girl.

But although police were warned in Bristol that he may be travelling here to meet a child for sex, seven police officers failed to stop him on his journey from the south of England.

Murray, from Devon, had met the girl via an online support group, pretending he was 18.

An independent police probe into the handling of the incident has now concluded officers involved had “made honest mistakes in good faith”.

Murray was spotted by a member of the public when he video-called the girl and two officers from British Transport Police were alerted at Bristol.

At Cheltenham Spa, officers boarded the train but could not find Murray. When he was approached by cops at Birmingham New Street, he gave them a false identity and said he was meeting his daughter.

Two days later, the victim called police to say she had been sexually abused by Murray at a hotel in Fife.

Murray, who had two previous convictions for sex offences, was jailed for four-and-a-half years at the High Court in Glasgow last year after admitting having unlawful sex with the girl and sending sexual images in November, 2017.

The IOPC report stated: “On 3 November 2017, a woman boarded a cross-country train and took a seat near a man who was engaged in a video call.

“The woman formed the impression from his conversation that he was talking to a school-aged girl, and was arranging to meet her for the first time in Scotland. The conversation included remarks of a sexual nature, which caused her concern.

“When she got off the train at Bristol Temple Meads Station, she approached two British Transport Police (BTP) officers and informed them of her concerns.

“One of the officers passed the information to the BTP Control Room, and an officer later checked the train at Cheltenham Spa Station, but could not find the suspect. Officers finally located the man at Birmingham New Street Station and spoke with him.

“He gave a name (which transpired to be false), and claimed he was meeting his daughter in Scotland. The officers allowed him to continue his journey.

“Subsequent enquiries established that the suspect was a convicted sex offender, who had given false details to the officers. Further attempts were made to locate the suspect, without success.”