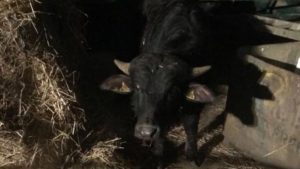 Bert the water buffalo has returned to his Fife farm after being on the run for two weeks.

The 63st  beast, which escaped after jumping a gate during a weighing, was found back in his shed at Clentrie Farm, Auchtertool, during a routine check by one of the staff.

During its time on the run the bull was seen near Shawsmill farm, Lochgelly.

Steve Mitchell, owner of The Buffalo Farm, tried various initiatives to track down the one-year-old bull, all to no avail.

However, Bert, as he was named during the hunt, has now returned home of his own accord.

A Buffalo Farm spokesman said, “Eddie visited the shed this morning to do his usual routines and discovered an amazing early Christmas present, our wanderer has returned.

“Overnight he has made his way back into the shed and settled down in one of the passageways.

“It’s a massive weight off our mind and we are really delighted to have him back.”

The spokesman added, “Thank you to everyone who has been so supportive, the interest in young Bert has been phenomenal.

“We are hoping that with part of our expansion plans at Boglily he can maybe become our mascot and a bit of a feature at Boglily, so it looks like after his adventures, he will be staying with us for the foreseeable future.”