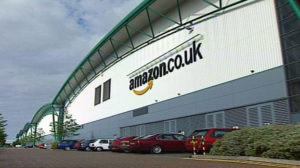 A former team leader at Amazon’s Dunfermline huge warehouse complex has been jailed for his part in a scam which saw the theft of goods worth around £11,000 from the site.

Ruslan Artiomov was the brains behind the fraud after his friend Maciej Golabek told him he was facing financial difficulties.

The two of them then became involved in stealing electrical and computer goods with the intention of splitting the proceeds.

However, when the items started going missing, the company installed CCTV cameras and caught the pair’s illegal activities on video.

This led to Artiomov and Golabek losing their jobs and appearing in the dock at Dunfermline Sheriff Court with an interpreter between them.

Golibec is Polish and Artiomov is originally from Lithuania but was brought up in Poland. Artiomov had been Golibec’s trainer at Amazon and the two became friends the court heard.

Artiomov (26), of Robert Smith Court, Lumphinnans, and Maciej Golabek (27), of Pollock Walk, Dunfermline, both admitted that on 18th December at Amazon, Amazon Way, Dunfermline, while in the course of their employment, they stole a quantity of electrical items.

Depute fiscal Azrah Yousaf said on 16th December a loss prevention officer carrying out inspections came across a box that was marked as empty but contained electrical goods.

These goods had gone missing that morning in the trans-shipment area of the facility. These items included sports watches, a computer processor and 24 hard drives.

A security camera was installed in the area and on 18th December the suspicious activities of the pair were captured.

The loss prevention officer contacted the police who obtained warrants and carried out searches of their homes.
They found stolen items and in Artiomov’s home there was a handwritten note listing the goods taken.

The Crown and defence solicitors had agreed a figure of £11,000 for the stolen goods although Artiomov had estimated they were worth £18,000.

Solicitor Jenny Simpson, for Artiomov, said her client had lived in Scotland since 2013 and had worked at Amazon since October that year.

“The co-accused is a friend of his through work. Mr Golebek was having some financial difficulties and Mr Artiomov came up with this project to steal goods and split the money between them,” Ms Simpson continued.

“He thought it would have a limited impact on Amazon, being such a big company.

“It was his idea. He’s ashamed of himself and embarrassed his actions have become known to others.” She added that her client was now unemployed.

Solicitor Elaine Buist said her client Golabek had been in Scotland for two years.

His wife had given birth to their daughter a fortnight before the offence, his brother who had been living with them had returned to Poland, resulting in financial problems for the couple.

“The scheme was suggested and Mr Golabek very unwisely entered into it. He says it’s not the sort of thing he thought he would get involved with,” added Ms Buist.

She said her client was now working at Marine Harvest in Rosyth.

Sheriff Charles MacNair drew a distinction between the parts played by both men. He told Artiomov he was the more senior colleague and had acted as trainer to Golabek.

“You had trained him and it was your idea,” the sheriff said to Artiomov, jailing him for 135 days.

He told Golabec, “You were the junior partner to your co-accused. He gave you the idea and you followed him.”

Golabec was placed on a community payback order with 300 hours of unpaid work.