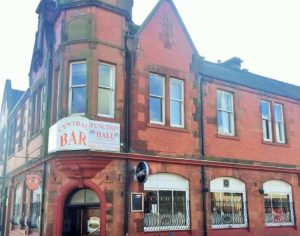 A Fife father and son have avoided jail terms for violent assaults they committed during a vicious brawl outside a Fife pub.

One man sustained a broken arm, two others suffered fractured jaws and a woman was sent sprawling by a punch in the face when trouble broke out in Cardenden.

The incident was described as “akin to a bar brawl in a Western movie”. Various people became embroiled as fighting spilled out on to the street.

The son, Stewart Dickson was already involved in a punch-up when his dad, Alexander, arrived in his car and quickly assaulted three people.

The father, who is also known as Stewart, was found guilty of three charges after a jury trial at Dunfermline Sheriff Court last month.

Beside him in the dock was his son who was found guilty of one charge.

The offences took place on 16th July 2017 at Station Road, Cardenden, outside the Central Bar.

He was also convicted of a charge that he assaulted Brian Milne by punching him on the head, causing him to fall to the ground, rendering him unconscious and thereafter punched and kicked him on the body all to his severe injury and impairment.

Dickson senior and his son Stewart George Dickson (32), of Main Street, Cardenden, were both found guilty of a charge that they assaulted Darren Haxton, by struggling with him, seizing him by the arm, repeatedly punching and kicking him on the head and body and threatened to kill him, all to his severe injury.

The court heard that the three people assaulted had been out in bars in Cardenden that day celebrating a friend’s birthday.

Trouble broke out at around 10.30pm after they went to the Central Bar.

Mr Haxton, a painter and decortator, said that Ms McCormack had been punched by Dickson junior as they stood at the front of the pub.

He said he was then involved in a “scuffle” with him before Dickson senior arrived in his car and began punching and kicking him as he lay on the ground.

The witness said Dickson senior then put him arm against a wall and “snapped” it. He was later taken to hospital where it was found he had a fracture to his right forearm.

Mr Haxton said there was a history of animosity between him and Stewart Dickson junior.

Stewart Dickson junior told police that Mr Haxton was “a trouble-maker” and that “no-one in Cardenden likes him.”

Gordon Martin, solicitor for Dickson senior, said the situation outside the pub that night was “akin to a bar brawl in a Western movie”.

Stephen Morrison, solicitor for Dickson junior, said his client had “shown remorse and a high degree of victim empathy”.

He added that difficulties had gone back 10 years following a dispute between Dickson junior’s sister and Mr Haxton, who was her neighbour at the time.

Sheriff Craig McSherry said both men could been have sent to jail, particularly Dickson senior who “has shown absolutely no remorse”.

However, instead he imposed a community payback order with 300 hours of unpaid for Dickson senior with 12 months’ supervision.

He sentenced Dickson junior to a community payback order with 200 hours of unpaid work.