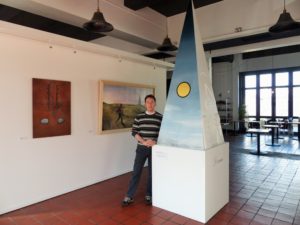 Skids singer turned film director Richard Jobson will be among those taking part in a discussion evening on the proposal to build a spire in Fife, in a public art project reminiscent of The Kelpies and The Angel of the North.

The idea by Ian Moir will be discussed at open meeting at Fire Station Creative. Speakers will include Richard Jobson and Fife politician Alex Rowley.

Also taking part will be Robin McAlpine director of the Common Weal and Falkirk councillor Cecil Meiklejohn will be speaking about the impact of The Kelpies on his area’s local economy.

The project would see the construction in Fife of a 300-foot tall spire which would be a national monument to citizenship as well as an arts gallery, a lecture theatre, a venue for staging events and a viewing platform at the top.

Ian believes the monument should be visible from the M90 and the former St Ninian’s open cast site, near Kelty, is one possible site, having been previously earmarked for public art.

Ian said, “Public art can be very divisive but people who have spoken to me personally have been positive about the idea. I’ve not had anyone come up to me so far and say they don’t like it. I’ve been extremely encouraged by the response.”

The experience of turning of a derelict fire station in the centre of Dunfermline into a thriving art gallery and studios has given Ian the confidence to take on a project on this scale.

The first phase will be to raise funds for a feasibility study and once that study is completed it would be the basis for a business plan. 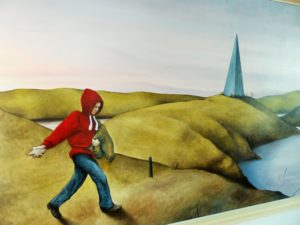 Ian continued, “We can only bring the public along with us by building trust gradually, taking one step at a time.

“With the fire station project at first we had an enormous committee and that didn’t work out. We now have a small team of do-ers and to get results we had to focus on specific tasks.

“I expected the project to work but didn’t think it would be popular. It’s given us confidence in the public and their responsiveness to opportunity.”

The discussion event takes place next Wednesday 29th March at 7.30pm. Tickets are free and can be ordered by contacting: ian@firestationcreative.co.uk