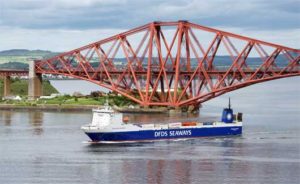 The Rosyth-Zeebrugge freight  ferry service, which had been running since 2002, has been axed.

Huge hopes had been placed on the Euro-link, operated initially by Superfast Ferries, when it started in terms of opening up economic and tourism opportunities for Fife,

However, these ambitions were never realised with the passenger service being dropped in 2010.

The final straw for the loss-making DFDS freight service was a fire on one of its ships last week.

That vessel is out of action following the blaze in an engine room and the ferry company said it had been unable to find a suitable replacement.

DFDS said it had now “lost all hope” of reversing its fortunes and that it had “no alternative” but to close the route.

The freight service between Rosyth and Zeebrugge has been operating since 2002. The service, which initially also involved a passenger facility, was launched in a glittering ceremony after years of campaigning by local politicians.

Charles Hammond, group chief executive of Forth Ports, which operates the Port of Rosyth, said they were “very disappointed” by the closure.

He added, “The Port of Rosyth is among Scotland’s best connected ports, with a range of opportunities currently being explored for the port as a whole.”