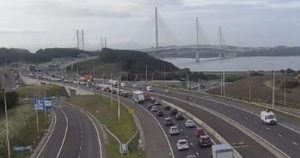 There have been more long delays tonight at the Queensferry Crossing on its first day open to traffic.

One frustrated Fife motorist described the opening day as “chaos”. She left work at Gogarburn at 4pm and four hours later was  still not home and still in the bridge area.

At rush hour this morning it was taking more than an hour to clear the new £1.35bn bridge in both directions with motorists keen to drive over for the first time.

The new bridge will take most of the traffic that currently uses the 53-year-old Forth Road Bridge, which will remain open for cyclists, pedestrians and buses.

The Queensferry Crossing, the UK’s tallest bridge, will be closed again this weekend to allow members of the public to walk across it.

About 50,000 people were given tickets after a ballot for a chance to walk over the new bridge on Saturday and Sunday.