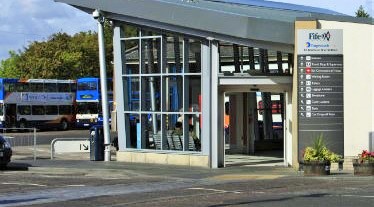 A Fife man, who committed a sex offence at a bus station in broad daylight, has been jailed.

Two females waiting for a bus at lunch-time were shocked by the actions of Douglas Keir.

He also committed similar sex offences in his garden in front of a child.

Keir also committed stalking offences against a care worker who had been trying to help him.

Keir (63), of Pitifirrane Park, Crossford, was previously found guilty of a string of offences after two separate trials.

He was convicted of an offence that between 1st September 2017 and 25th September 2019, in Torryburn, he engaged in a course of conduct which caused fear or alarm to a woman living there, by repeatedly attending at her home, hand delivered, sent and provided letters to neighbours and refused to desist when repeatedly told to do so.

Keir was also convicted of another offence that on two occasions between 7th August and 1st November this year at his home he engaged in sexual activity in the presence of a woman and a child by rubbing is genitals.

Depute fiscal Azrah Yousaf said that at 12.30pm two females were waiting for a bus at St Andrews station when they became suspicious of the behaviour of Keir who was walking about with a large tear in his trousers.

In the offences committed at his home and garden, there was a seven-year-old boy present.

The court was told that Keir still maintained he had done nothing wrong and would not consent to a community-based sentence.

Sheriff James MacDonald jailed Keir for six months and put him on the sex offenders register. A five-year non-harassment order to protect the stalking victim was also imposed.