A convicted Fife killer threatened to murder his neighbours in a row over noise.

David Kinloch was upset about people having a party in the flat next door to him in Dunfermline and when police were called he struggled violently with officers.

When he appeared for sentencing, Kinloch, previously jailed for killing his girlfriend in an attack with a dog chain, was furious when told his current prison term was being extended.

Kinloch (35), previously known as Craigie, was the neighbour from hell when he moved into a street in Dunfermline with girlfriend Amanda Britt. 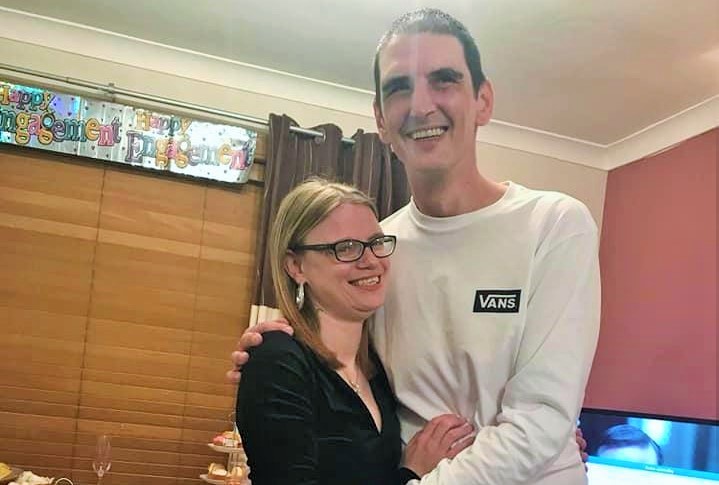 *Kinloch was at home with Amanda Britt when trouble erupted again

He was jailed earlier this year for chasing a neighbour with a knife and has now been given additional time behind bars for threatening to kill the people in a flat next door to him.

Kinloch had previously admitted that on 20th January last year at Craigmyle Street, Dunfermline and at Dunfermline police station, he shouted, swore, made threats and repeatedly struck the inside of a police vehicle.

He admitted assaulted a police officer by kicking him on the hand to his injury.

He also struggled violently with three police officers at the police station.

Depute fiscal Azrah Yousaf said, “At around 10pm there was a party going on and people had been drinking. The accused started to bang and shout through the wall.

Police were contacted by neighbours and when officers detained Kinloch he became aggressive, banging on the cage door of the police vehicle.

At the police station, he struggled violently with officers, kicking one of them on the hand.

Defence solicitor Paul Parker Smith said, “It was a noisy neighbour situation. He was complaining about the noise people were making at a party in a block where sound-proofing is not very good.

“He appreciates he kicked off.”

He was originally given a six-month ‘tag’ for the offence but was unable to comply after being jailed for the other incident in the street.

In February, Kinloch was found guilty by a jury of chasing a neighbour with a knife in the same street.

Terrified Kieran Locke thought it was his “last day on earth” when Kinloch ran at him with the knife.

During that trial, Kinloch’s girlfriend Amanda Britt found herself behind bars for attempting to have the proceedings halted by blurting out his previous conviction for culpable homicide from the witness box. She was jailed for four months for contempt of court.

Kinloch’s appeal in the knife case was thrown out last week and he was brought back to Dunfermline Sheriff Court to be sentenced again for the death threats.

Sheriff Charles MacNair pointed out that a death threat from someone with Kinloch’s background is a different matter than in other cases.

“From what was said at the trial, everybody in the street seems to have been aware of his background,” he added.

Kinloch was already serving a sentence of five years and three months with an earliest release date of February 2023, his solicitor told the court.

The sheriff jailed Kinloch for 110 days to run consecutively to his current sentence.

Kinloch was irate when he realised he would have to serve additional time. He began ranting, “Consecutive? F****** kiddie fiddler, paedo b******” as he was taken back to the cells.

Kinloch, then known as Craigie, was jailed for six years in 2008 for terrorising and torturing his 21-year-old girlfriend Sonya Todd for five hours before she died at their home in Methil.

He admitted repeatedly striking Sonya with a dog chain, biting, punching and kicking her.

He was initially charged with murder but admitted a charge of culpable homicide as Sonya’s diabetes was considered to be a factor in her death.