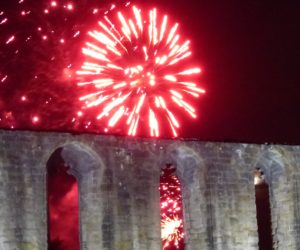 The public have again been asked to play their part in making this year’s event as successful as previous years.

With a crowd of up to 30,000 expected, measures have been put in place to ensure the safety of all those attending.

This year’s theme is ‘Poptastic’ and the spectacular display will be accompanied by some of the biggest chart hits of recent years.

Before the fireworks the huge crowd will be entertained by an Ariana Grande tribute act.

The programme starts at 6pm with the Kingdom FM DJs and at 6.30pm the tribute show begins leading up to the fireworks at 7pm.

As was the case last year, the bottom gate of the Glen will be closed to help control and manage the large crowd.

You can enter via the Abbey Gates, the Louise Carnegie Gates and the Pittencrieff Street Gates.

The Coal Road will be closed between 4pm and 8pm and other temporary restrictions will be in place to aid pedestrian access around the park.

The Kingsgate car park will be opening late until 8.30pm with an all-day charge of £3.50.

Adverse weather can sometimes put events in doubt at this time of the year and Kingdom FM will giving updates on the day in the case of high winds.

“The Dunfermline fireworks display is now recognised one of the biggest and best in Scotland with people coming from all over the country,” said Chris Foote, events manager of Dunfermline Delivers.

“We had new measures in place last year to deal with the crowds and they worked well. We ask people to plan their trip in advance, arrive early and have a great time.”