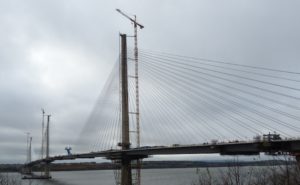 The consortium which built the £1.35 billion Queensferry Crossing has been fined just £10,000 over a botched heavy lifting operation which resulted in a worker being seriously injured.

A crane mat came crashing down on to the foot of 49-year-old slinger Desmond Flett resulting in him having five toes amputated.

The operator of a telescopic handler, being assisted by Mr Flett, was not qualified to carry out the job at that time.

His operator’s ticket had expired and there was also no lifting plan drawn up for the task among other health and safety failures.

The chains attached could not hold the load during the lifting manoeuvre resulting in the life-changing injuries to Mr Flett, who has been unable to find work since.

The accident took place on Saturday 11th April 2015 at a storage facility in Rosyth Dockyard and has now resulted in proceedings at Dunfermline Sheriff Court against Forth Crossing Bridge Constructors (FCBC).

FCBC admitted that it failed to ensure that an operation involving lifting equipment, to lift and move a steel crane mat was properly planned by a competent person, appropriately supervised and carried out in a safe manner by allowing the operation to proceed with unsuitable lifting equipment and as a consequence the crane mat fell striking Desmond Flett to his severe injury, permanent disfigurement and permanent impairment.

A sheriff observed that the failure was “multi-faceted” including using chains that were not long enough for the job, no lifting plan being drawn up and the operator’s ticket having lapsed.

The heavy load came down on to the foot of Mr Flett resulting in the steel toe-cap of his boot being flattened.

He required surgery to have all five toes on his left foot amputated, followed by skin grafts.

The court heard he is still on medication to tackle pain and depression and may require further skin grafts.

Depute fiscal Gavin Callaghan said that when the load came down on Mr Flett’s foot, his steel toe cap was “squashed flat”. He was rushed to the Victoria Hospital then to Ninewells in Dundee.

A telescopic handler by a colleague had been used in the botched operation.

Defence solicitor Katherine Metcalfe expressed “sincere regret to Mr Flett for the impact on him and his family”.

She said there had been an urgent requirement to move the mats on the Saturday because they were blocking access for a scheduled fuel delivery.

Sheriff Keith O’Mahoney said, “This is an event which has clearly had a significant, serious and long-lasting effect on the complainer Desmond Flett.

He said this was a “multi-faceted failure”. The operator’s ticket had lapsed, no plan was drawn up and the chains were too short for their purpose, he added.

The maximum fine which could have been imposed was £20,000. Sheriff O’Mahoney decided the appropriate fine for this offence should be £10,000.

FCBC was a joint venture of four companies and appointed by Transport Scotland to build the Queensferry Crossing.