Fife youth gets one-year sentence after spitting at bus staff 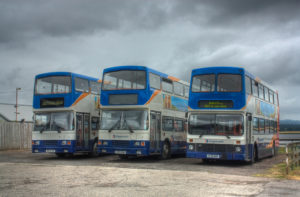 A Fife teenager, who tried to spit on three bus drivers, a depot staff member and a police officer, is beginning a custodial sentence of just over a year.

Lennon McAlpine admitted he was drunk and “acting the big man” when he committed the offences at Dunfermline bus depot.

He had been released early from a previous custodial term when he went on his spitting spree.

The incident happened after he and two females travelled by bus from Kirkcaldy to Dunfermline.

When they got off, they left a bag on the bus containing alcohol and cigarettes and headed to the depot to try to retrieve it.

Even before they got to the depot, the two females were “mouthing off” to the driver of the bus they took to get there.

Then when they got off that bus, McAlpine tried to spit on the driver but he managed to shut the door in time to stop it reaching him.

He previously admitted that on 31st March last year, at the Stagecoach bus depot, St Leonards Street, Dunfermline, he assaulted William Kelly, a bus driver there, by attempting to spit on his body.

He also assaulted bus drivers Charles Moore and David Anderson by attempting to spit on them.

He further assaulted Ben Chalmers, employee at the depot, by again attempting to spit on him.

McAlpine also admitted that on 1st April at Dunfermline police station, he assaulted PC Joanne Pearson by attempting to spit on her.

Depute fiscal Alistair McDermid said staff at the depot had told McAlpine to “go home” and he tried to spit on them.

He also tried to spit in the face of a female police officer after being arrested and eventually a spit-hood was put over his head.

Defence solicitor Danielle Varela said her client had been with his then girlfriend and another female at the time.

The females were the ones “mouthing off” initially but then McAlpine “became involved in the most unpleasant manner”.

“He says he was acting the big man in front of the females. He has said his behaviour was ‘horrible’ and ‘disgusting’,” added Ms Varela.

Sheriff Charles MacNair said McAlpine’s action were “quite disgusting” and such behaviour “will not be tolerated”.

He sent McAlpine back to Polmont YOI to serve 250 days of his days of his previous sentence and added another 135 days for this latest conviction.